The Four Winds BMW Club was originally known as The BMW Owners Association, Inc., of Pittsburgh, an organization that predates (along with several other clubs) the BMW Motorcycle Owners of America (BMWMOA) and the BMW Riders Association (BMW RA) by several years. However, as the years went by very few members when asked could rattle off the club's official name, "The BMW Owners Association, Inc." of Pittsburgh without stumbling around. Many, in fact, confessed they never could remember the official name of the club. 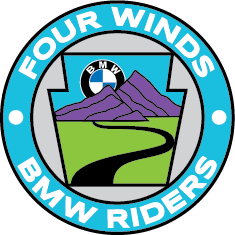 One thing everyone could remember, however, was the name of the Club's annual rally, "The Four Winds Rally." The BMW Owners Association, Inc., a group of motorcycle enthusiasts from Pittsburgh, Pennsylvania area, held their first BMW Invitational Rally over the weekend of August 12-13, 1967 in Carrolton, Ohio on an 80-acre ranch and camping area in North Central Ohio. The following year a second rally was held in Ohio and in subsequent years the rally has been held at various sites in Western Pennsylvania giving our club the claim of having the longest running BMW motorcycle rally in America. It wasn't long before the name Four Winds was given to the annual rally, a well chosen name in that from the very beginning riders of these unusual and quiet German touring bikes appeared at the rally from all directions, representing many states as well as Canada. 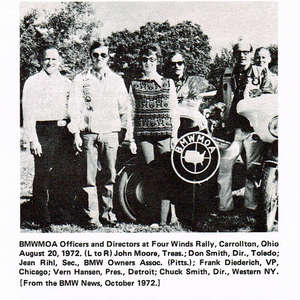 Frank Dietrick, one of the founding officers of the BMWMOA, has written in his history of that organization that the very first meeting held to discuss the formation of a national BMW motorcycle organization was at a Four Winds Rally. The origin of both the BMWMOA and the BMW Riders Association can be traced to that meeting.

When the club decided to amend its by-laws in the late 1980s it was discovered that the state had no record of an entity known as The BMW Owners Association of Pittsburgh, Inc. When the new by-laws were in place the club name had been officially changed to something everyone could remember and a name already widely known and respected in the BMW community, "The Four Winds BMW Riders."

Club activities have varied over the years but all administrations have placed a high priority on holding a quality rally each year. More often than not it has been held on the 3rd week-end of August.

While we have much to be proud of in our past, we are just as proud of our tremendous success in recent years. We have held a 100+ membership for years and have been fortunate to have gotten valued contributions from many different members (both older and newer), making possible a variety of activities to help us enjoy our sport and meet new friends. Check us out. This is a good time to be involved. 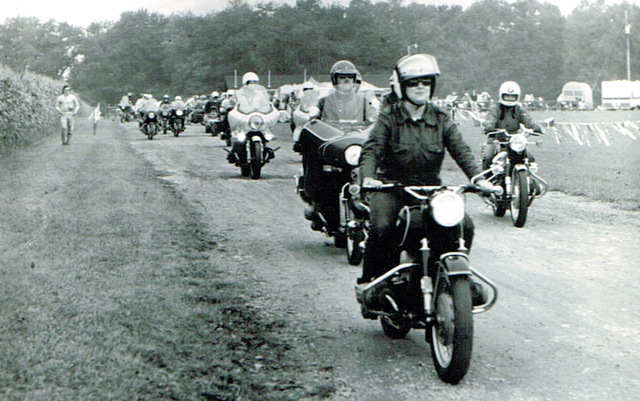 From the very beginning it was a thrill to watch as riders of these unusual and quiet German touring bikes arrived at our rally from all directions.  Colwell's Campground, Knox, PA, circa 1975.

Jean Rihl recounted the excitement of watching a large group cresting the hill coming into sight with matching shirts and ties.

My first big ride with the Detroit club was to a Four Winds Rally in Pennsylvania (approx. 1972). There were 35 bikes riding together. Vern Hansen (the 1st Nat’l. BMW MOA president) – being ever safety conscious – insisted that we ride in groups of six and ride in a staggered style. We all wore bright orange-glo vests (the closest we ever got to “colors”). In the process of planning this ride, Vern suggested that it would be classy if all the men wore white shirts and ties. I got out the old sewing machine and made plain dark blue ties for all of the men. No “Hell’s Angels” image for the BMWTCD. Never will forget our first stop for coffee and a stretch. Thirty-five bikes pulling up to a restaurant… you could see the panic on the waitresses’ faces! But as we dismounted and the guys took off their jackets and helmets, there was an audible sigh of relief from people in the restaurant as they saw the white shirts, ties, gray hair and bald heads.J